A Beach Landing? Well, He’d Seen It on TV


These things look so easy in Alaska.

A 24-year-old pilot with an airsick passenger who landed his single-engine Piper Warrior on Rockaway Beach in Queens on Monday night could not be talked out of it, no matter how hard an air-traffic controller tried, according to a recording.

The pilot, Jason Maloney of Cornwall, N.Y., later told the police that he had gotten the idea from a television program called “Flying Wild Alaska” that depicted rough landings.

The air-traffic recording illustrates how quickly a pleasant sunset jaunt in a private airplane can go wrong and bring dozens of emergency responders, all because of a sour stomach. No one was injured or arrested, but the Federal Aviation Administration is investigating Mr. Maloney’s actions.

He and his two passengers, Clarke Oler, 22, and Chelsea Protter, 21, started out of Stewart International Airport, just west of Newburgh, N.Y., and landed at Republic Airport in Farmingdale, on Long Island, before taking off again on Monday evening, said Paul J. Browne, a police spokesman.

Mr. Maloney soon requested permission to cruise along the Rockaways shore and sounded quite relaxed, even uncharacteristically so by pilot standards. Twice, upon receiving authorization to fly below 500 feet along the shoreline, the pilot replied, “Roger,” but stretched it out and pronounced it, “rod-jaaah,” according to the recording. He also told the controller, who was nearby at Kennedy Airport monitoring outgoing flights, “Just let us know if we’re up in your grill, you know?”

At some point, Ms. Protter became sick, and Mr. Maloney made an unusual request to the controller. He said he wanted to bring a “pastor” to Kennedy “who’s doing some medical mission work. Where would I drop them off at your airport?”

A short while later, Mr. Maloney presented his next idea to the controller.

“Hey tower, I’ve got a question for you,” he said. “This might be crazy, but are we allowed to land on the beach?”

“I don’t think so, unless it was an emergency,” the controller replied. The recording was posted to the Web by LiveATC.net, which tracks air communications.

“I’m a paramedic,” Mr. Maloney said. “Is there anybody I can ask?” (Mr. Maloney is studying medicine at Georgetown University; his grandmother, Helen Maloney, 82, called him “the most wonderful person that I know” and said he builds homes for Habitat for Humanity.)

The controller told him that all the beaches are public and that only emergency landings would be allowed. Mr. Maloney asked if there were any private beaches nearby, and the controller said he did not believe so.

The controller asked if he needed help, and Mr. Maloney said, “You know what, we should be fine, but I’m going to make a precautionary landing. Is that all right with you?”

“Landing will be at your own risk,” the controller replied.

“We got that,” Mr. Maloney said. “We’ve got a sick passenger, so we’re not going to declare an emergency, but we’re going to land on the beach.”

“Well, then that would be an emergency,” the controller said. “Hold there, they’re going to be sending police.”

A police helicopter from nearby Floyd Bennett Field saw the downed Piper as it approached. “Looks like the passengers are out now, walking,” the helicopter pilot said.

That outcome was hardly a given. There are less attractive places to put down an airplane, but a beach landing is no mean feat. Pilots learn how to execute various soft-field landings, as on a beach, in training.

The controller told the police to look out for a news helicopter belonging to Fox 5: “My guess is he’s going to be headed toward your area,” he said.

With police patrol cars, trucks and firefighters hurrying to the scene, the first police helicopter touched down near the Piper. The pilot, a detective named Dennis Derienzo, saw Ms. Protter throwing up on the sand and Mr. Maloney walking away from the plane, Mr. Browne said.

Apparently, the show Mr. Maloney watches was still on his mind, because, said Mr. Browne, Mr. Maloney asked the detective: “What’s the big deal? It happens all the time in Alaska.” 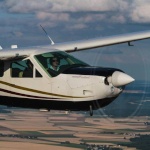 alexoom
Jeunes Ailes For Ever