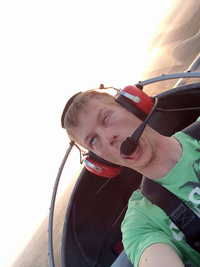 Insider
Jeunes Ailes For Ever

Yes its true. You can make oodles of money here in China. I as a 190 driver make more than any wide body captain in the US, and I have over 18 weeks paid holiday a year plus normal days off.

But there is a natural economy to this and it’s not the gleaming diamond you think. Your vision is of your life now, today, as it is, with all its comforts, cleanliness, proximity to friends and family, in a system you are familiar with, where everyone speaks your language and understands your culture.

This is my second contract overseas and I can tell you why we make this kind of money.

We have less job security and no seniority list. If there is any hiccup we are the first to go. We are the outsiders and the locals always remain. We have no pension. This is not a permanent gig. There are some longer term contracts but the company has no interest in keeping us on payroll any longer than necessary.

Kids pee on the street 10 meters from a bathroom, people spit everywhere, I see have seen people laying a nice brown heap on the sidewalk. I live in a country that not only has cornered the market on plastic toy exports but all the super infectious germs resistant to antibiotics. A place that routinely is polluted so heavily that you can stare directly at the sun without squinting... ..if you can see the sun. A place where purple industrial waste lays meters from farmland. An economy so self-driven that it mirrors Dante's Inferno's passage where no one can escape because everyone pulls each other down to get ahead.

A place where there are three kinds of alcohol. Fake, not so fake, and almost real. An underground that reuses cooking oil into infinity and buys bottles from authentic international places to re-bottle them with fake hooch. Unless you pay 3x what it costs normally you are not really drinking alcohol and even then that is not a guarantee.

The chemicals in everything you eat is life shortening. A country where just the simple task of getting to Facebook requires a special "tunnel" program to circumvent the great firewall of China. Initially for 2-3 months you will heave all the colors of the rainbow until you are used to the bacteria of the East. Cleanliness is next to Godliness and most Chinese don't believe in God so they don't believe in Ajax either. One rag to rule them all cleans your bed, your floor, your toilet, your dishes.....in that order. The best overnight hotels are in comparison with the worst ones you have ever stayed back home.

There is bare minimum communication. Almost no one outside of Shanghai and Beijing speaks even broken English. Hong Kong does not count because let’s face it....that's not Mainland China. Even fewer people read English. None of my ground crew speak English. Sure you can get the sucky sucky but there is a target on your back for your passport and your money. The first questions asked are...Are you single, do you have children, do you want children, where do you work, how big is your house, how much money do you make. Really, after what is your name these questions are the immediate follow up.

I have a 3 man cockpit in an E-190 to keep me going through to 16 hours or more every day. I get holidays but even when I am off half the month I am burning 80 or more flying hours in two weeks. There is no 30/7 rule here only 100/month. Routinely the pilots time out at 1000 hours per year. The delays in Summer mimic EWR. The ATC outside of Shanghai and Beijing barely speaks English and on runway 27 it is normal to be flying a 090 heading, off any charted approach on vectors, and have the controller say..."cleared for the approach". You are ATC. My ICAO English examiner could not understand what I was saying.

Your F/Os while smart are 200 hour wonder pilots. And when I mean 200 hours I mean they just checked out and this is their first jet airplane. The last thing they flew was a C421 for 40 hours. In my initial sim the F/O who didn't speak English did not give a call about my speed during takeoff roll. The sim tech put in a windshear and airspeed had stagnated and I had already transitioned to outside reference before V1 above 100 kts. The F/O said nothing. As we overrun I shoot a glare to the F/O and he says something in Chinese. The translator says "He says he is sorry he never saw this situation before"

"The regulation of using checklist is the valuable experience of what had happened before with high cost and scientific treasures summarized from the bloody accident. The operation of checklist is used to standard behavior, strict operation, detailed procedure, and it is the valuable treasures of preventing mistakes and important tool of assuring flight safety."

The check rides are old school. Multiple failures. I've had my RAT out single engine with a multiple hydraulic, screen failure, anti-ice failure, decompression, Electrical malfunction all at once with an F/O who does not speak English. I've flown V1 cuts IN THE AIRPLANE to 500 ft circling patterns with a hood. Engine failures at 400 ft and securing the engine by 1000 ft is challenging and can be done but not when you need a translator to get it done. You make your own procedure and get it done by 1000 FT. People add weight to takeoff performance when clearly the English says SUB or Subtract. But they don't know English.

Line Check Airmen can be old school military to completely not knowing a damn thing about the SOP. There are good pilots but few who can fly or know SOP.

Many people leave after the first few days unable to cope with the culture shock. This is not Hong Kong or Shanghai. This is Mainland China where people smoke in hospitals and there is no such thing as pedestrian right of way....even on the sidewalks.

Most importantly you should never bring your kids here unless you appreciate them eating arsenic. The pollution is terrible. It is beyond terrible. It’s hazardous. The US Embassy advises no to go outside for any period of time many days of the year in my city. Where the distributors know that imported food is in demand they counterfeit everything and even that imported Sunkist label is a knock off. Marriages crumble with the distance, children are seen twice a year and those who do commute back and forth age so quickly you encourage them to double up on life insurance.


Expats drink a lot to deaden the loneliness and pain. I've seen people who didn't drink put away a fifth a week. There is no Meet up group or speed dating. This is make your own a la carte.

This is just the tip of the iceberg and I have mentioned almost nothing about the real cultural differences.

It could work out for you. You could marry that stripper and everything will work out. But the odds are you are looking at a disaster on your hands and that my friends is why I make more than the most senior Delta captain who comes home to his family every week. China does not have the experienced captains that take 10 years of training to mold out here. And in all Asian countries it’s about 10 years. With foreigners reluctant to move here because of all these and other difficulties I am a drop of water in a desert.
gc232

I have been a expat in Africa, the Middle East and Eastern Europe. none of which were home but all of which were better than being unemployed at home or worse trying to live on the same salary as a McDonalds employee at home.

When I talk to most of my collegaues here in the sandpit one thing is common Expat life is sometimes a lifestyle choice but mostly is the only real choice that most of us have. I personally would take Emirates over BA any day of the week but I am the minority. I find the quality of life in Dubai far better than I could ever have in UK, career path is better, airlines are better, society is better, schools are excellent, family is happier, etc etc and to boot everyone speaks English!

none of this is the case in China but you chose to take China over the Middle East. I do not think many pilots out there think that China is a 'gleaming diamond' more that you go there take the money and are happy to provide a life for the family or stay home and have a mediocre life. That is the life that results from supply and demand.

Yes there are pay issues, language issues, personality and cultural issues. the weather is an issue and disease, health, hygiene, etc are not on a par to home but I for one prefer to take the money and be happy to provide my family with what they deserve for having put up with my career to date. Those who want to stay home, great less competition for me and keeps my pay up!
Dorian33